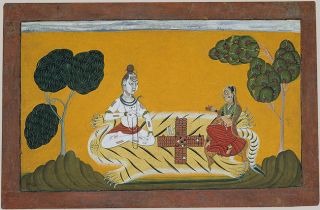 Chaupar is a board game of the Cross and Cross and Circle family played in India that is very similar to Pachisi. It is believed that both games were created around the 4th century A.D. The board is made of wool or cloth. The dice are six cowry shells and the pawns are made of wood. It's usually played on a table or the floor.

There are palaces in Allahabad and Agra which served as giant Chaupar boards for the Indian Emperor Akbar I from the Mogul Empire in the 16th century. The board was made of inlaid marble and it had red and white squares. He used to sit in the center and toss the shells; 16 women from his harem were the pawns and they moved the way he told them.

Retrieved from "https://parques.fandom.com/wiki/Chaupar?oldid=3172"
Community content is available under CC-BY-SA unless otherwise noted.